ONE OF the best views in Longton is from the office of Richard Cresswell, owner of RD Cresswell & Co Ltd. Richard is also Longton Chamber of Trade’s vice-president.

“Yes, I just love looking out over Times Square across from the splendid town hall, the Crown Hotel and railway station with its iron bridge,” says Richard.
“We came to Longton when my father bought Thomas Forrester’s warehouse, in Baths Road, in 1959. Our front building overlooking the square was built in 1968 on land that was occupied by the Eagle pub. I wonder whether anybody remembers that now?”

Most people I speak to refer to the collection of roads in front of the imposing town hall as Times Square. It is pivotal to the distribution of Longton’s streets where its quirky layout takes you in a merry-go-round unlike any other in Stoke-on-Trent. Times Square should be central to the town’s activities, and yet all it seems to be is a hodgepodge of lane ends.

“Maybe the clue is in its name,” says my fellow traveller Steve Birks, who is on a journey of his own in search of Stoke-on-Trent’s old roads.

“Ask most people to tell you the difference between Longton and Lane End and they will say Lane End is just another name for Longton. And yet nothing could be further from the truth.”

So where does all this confusion come from?

“Confusion often arises over where exactly Lane End and Longton were,” explains Steve. “Originally they were two separate and contiguous townships that were incorporated in the Borough of Longton in 1865. Longton was adjacent to Longton Hall and included Longton Hall Colliery and Brickworks. Even in 1900 that area was mainly fields.

“On the other hand, Lane End was an individual place centred on the area around Market Street and the bottom part of Anchor Road with a major crossroads in Times Square.”

So it looks as though Lane End was a town within a town.

“That’s a simple way of putting it,” agrees Steve. “But not strictly accurate. We know in 1841 Longton’s population was just over 10,000 against the population of Lane End of  1,952. This indicates that Lane End was a small location but with a distinct constituency.”

St. John the Baptist Church –  February 1975
The church was demolished in 1979 because of mining subsidence, in the background can be seen the Crown Hotel. This picture was taken from Rutland Road. After demolition of the church the graveyard was cleared and the site used for retirement housing.
Source: “Kevin Long” 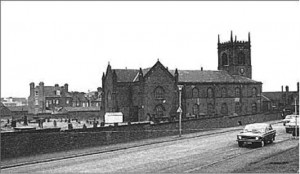 “That may be so,” says Steve. “But the important buildings that set it aside as a community have gone. Take St John’s Church, for instance. The graves have been moved and there is no evidence that a church was ever here, even though it was an important part of Lane End.”

St John’s towered above the Crown Hotel in what is now King Street.

“King Street was then named Church Street,” Steve continues. “Market Street was High Street, leading to Weston Road, since changed to Uttoxeter Road. The names of nearly all these town centre roads were changed. I don’t know where they got the name Strand from, or Times Square for that matter.”

But according to Ward’s History, the name was changed from Lane End to Longton because Lane End was offensive to the new inhabitants, conveying the idea the townsfolk were mean.

“Nevertheless Lane End was an important junction,” says Steve. “Main routes left here for Stone, over Sandford Hill to Hanley and Leek. You could get to Liverpool and London by stage from Lane End but not from Longton.

“And there’s no doubt the road passing south-east through the square was a Roman road. Turnpike roads greatly improved the town’s status, maintaining an important link to the growing Potteries; the connection to Longton Hall was relevant, and so the two locations became one.”

This then was Lane End, more important than Longton as junction and terminus. And in some way it lends weight to my own conviction that Stoke-on-Trent will always be a collection of towns federated for convenience rather than for strength.

“LANE END, a populous and thriving market-town, and with LONGTON, forms an extensive township, situated five miles south-east of Newcastle, at the southern extremity of the Potteries, and has risen in a few years by the almost magical influence of a prosperous manufacture to a respectable degree of opulence.” 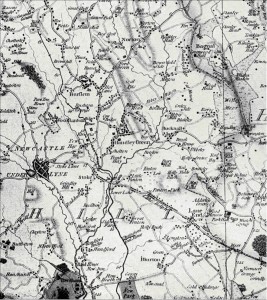 “Longton and Lane-End are two townships, or liberties, forming one flourishing market town now commonly called Longton, and situated at the southern extremity of the Potteries, five miles SE of Newcastle-under-Lyme, and six miles SSE of Burslem.
This rapidly improving town is extensively engaged in the china and earthenware manufacture, and is pleasantly situated in the bosom and on the sides of the valley of a small rivulet. It is crossed by the North Staffordshire Railway, which has a station, carried on arches over the lower part of the town, constructed in 1848.
The population of Longton in 1841 was 10,393, and Lane-End, 1,952, so that the chief part of the town is in the manor of Longton, although, until about ten years ago, the town was popularly called Lane-End.”

From: William White, Sheffield. “1851, History, Gazetteer and Directory of Staffordshire”

“LONGTON, a town, a chapelry, and a sub-district in Stoke-upon-Trent district, Stafford. The town stands on the North Staffordshire railway, 5 miles SE of Newcastle-under-Lyne; is regarded as conterminate with the conjoint township of Lane-End and Longton; was formerly, as a town, called Lane-End; is situated in the southernmost part of the pottery region; was, in the last century, an obscure village; and has risen to be one of the most populous and flourishing of the seats of the pottery manufacture.”

From: Wilson’s 1870-2 Imperial Gazetteer of England and Wales