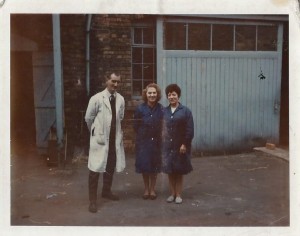 This a pic of Basil Birch the warehouse manager plus Winnie and Elsie who packed the teachests to be sent to the department stores we supplied. We all had a lot of fun at Phoenix in those days.

This must have been taken in about 1962 after we demolished the top storey of the frontage, which was dangerously leaning over by 2ft and we were then left with the old single storey frontage which we had to replace later on due to water ingress. There was also an enormous roof light just visible on the three storey section which became dangerous and had to be removed later. It was obviously installed by Thomas Forester to create more light into the showroom which was on the top floor of that section. Mr Ridgway had not yet installed the large windows in the building on the left for his motor car business. We bought that property in 1993 to incorporate it into the Phoenix site.