At last ! After much googling and searching, I found a photo of the Phoenix Works frontage before we messed with it. 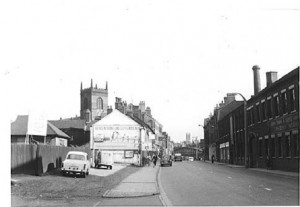 The frontage of Phoenix is immediately on the right in this pic. A difficult tiny arched main entrance obviously suitable for horse and carts but hopeless for our 7 ton van. It says this was taken in 1961 the year we bought the place. It must have been early in that year as we couldn’t wait to plaster our name ‘G E Milner & Son Ltd’ all over the front in place of John Shaw and Sons which is there in this pic.

I now desperately wish I had taken loads of pics but I was quite busy moving in all our stock. I do have an 8mm film of the bottle oven demolition which Mr Ray Johnson of the Staffordshire Film Archives is obligingly going to help me to get digitized at the BBC post production lab when I bring it up in May.

I am quite relieved that 1961 was way before the property was listed as we wouldn’t have been able to easily make the changes necessary to bring it back into proper use as warehousing. It was obvious when we bought it that the frontage was leaning over due to subsidence. Once we took possession we dropped a plumb line from the gutter or eaves and found that the wall was actually leaning over two feet from top to bottom which is way beyond the point of stability. Very scary !!!

We solved it by completely demolishing the top floor which in itself was quite dodgy as when they lifted the roof the front wall would definitely have collapsed. It was solved by Stan Jackson of Parkhall Demolition by removing the windows threading a hawser wire through each gap to hold the front while the roof was lifted and then the first floor front wall was dropped. It had to be done early on a Sunday to avoid killing any passers by ;-).

What was the first floor was then covered in asphalt and became the roof. It all worked a treat. Thanks Stan. At the same time we demolished the small lodge which gave us really good access to the yard. Later on Stan demolished four of the six bottle ovens for us to create warehousing space.