Mayfayre Pottery The Last Pottery Manufacturer Who Has Been There For 32 Years Leaves Phoenix Works.

This was a rather emotional albeit momentous day at Phoenix Works. My cousin, Alan Clark, who has owned and ran Mayfayre Pottery at Phoenix Works for the last 32 years has called it a day and retired.

At one time in the 1970s and 1980s no less than 38 companies worked throughout Phoenix Works either manufacturing bone china or earthenware pottery plus allied trades such as decorating, lithograph printing and brush making. There was a competitive atmosphere but also a great feeling of camaraderie and inter-company dealing.

The general situation in the pottery industry deteriorated in the late 1990s and finally by 2000 there were only three pottery manufacturing companies left at Phoenix Works. They were Mayfayre Pottery, Queensway China and Amber China.

Queensway needed extra room due to expansion and left for larger premises, sadly Amber closed down but Mayfayre kept going.

Now we are the end of the road. Alan has turned over his last casting mould and decided to retire. He was very sad. We were very sad but we all had a super get together at the Glost House Cafe Bar organised by Alan’s wife, Julia to celebrate and/or commiserate his retirement. I’m really going to miss our chats whereby we sorted the world’s problems out. This is definitely the end of an era. We at Phoenix all wish him a long, healthy and happy retirement. Best Wishes Al.

Not Sure if the Balloon survived. 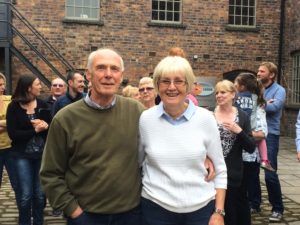 Alan and His Wife Julia 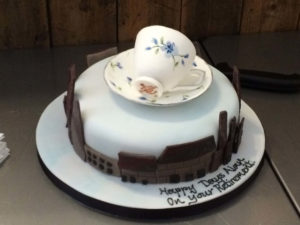