My cousin Alan Clark. His company Mayfayre Pottery is the last potter at Phoenix. 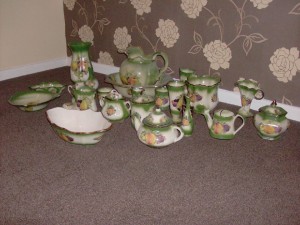 I notice that there is quite a bit of Alan Clark’s (Mayfayre Pottery), who is my cousin, past production on Ebay these days. He is actually still potting at Phoenix.

During the late 1970s and 1980s there were about 35 small companies in units in Phoenix all had something to do with Pottery. They were mainly manufacturers but there were also lithograph printers, decorators etc etc.

During the 1990s they virtually all disappeared due to the sad decline of the pottery industry as a whole. Three hung on in there until 2000 they were Alan (Mayfayre), Peter Gant (Amber China) and Dave Bentley (Queensway China).

Sadly Amber went into liquidation and Dave moved on to a bigger unit.

Alan has been there with us for many years. His workshop is right next to one of the bottle ovens.

There is nothing he doesn’t know about potting as he has been doing it all his life and has solved many complicated ceramic problems for people.

He has always told me that clay is in his blood. Not sure about that but he is doing what he has always loved.